VID's will get special treatment, especially regarding rights and renewals. So called VID insurance means that a VID's registration never expires accidentally. It will also be harder to transfer VID's to new registrants, since it will require confirmation from the registrants themselves, either digitally or a signed confirmation.

SIDN is organising the 2012 Domain Name Debate at the Koninklijke Schouwburg in The Hague on 28 September. SIDN uses such debates to gauge stakeholder opinion on proposed changes to the rules governing the Netherlands' internet domain. At the debates, any interested party can have a say and thus help to shape future policy. The fourth Domain Name Debate focuses on drop-catching and further restriction of the amount of information about private registrants available from the Whois.

InternetNZ (Internet New Zealand Inc) is pleased to announce that it has approved the creation of a new second level domain in the .nz domain name space - .kiwi.nz. This expands the range of choice New Zealanders have in the domain name market and means that people will soon be able to register personalised domain names ending in .kiwi.nz.
The implementation of .kiwi.nz is being managed by InternetNZ’s subsidiary company the Domain Name Commission Ltd.  Authorised .nz registrars will be able to take registrations for these names from 10am on Tuesday, 11 September 2012.
Domain Name Commissioner Debbie Monahan describes the .kiwi.nz application as fitting perfectly with its previously published criteria for new second-level domains. Under its current policy, a new second level domain can be created if it:
InternetNZ President Frank March says, “The .kiwi.nz application clearly met these requirements and should be an option for .nz registrants.  The InternetNZ Council agreed that it met all the policy requirements and so approved it. We congratulate the Domain Name Commission for undertaking an open and transparent consultation process with the community.”
“The policy for evaluating a new second-level domain takes into account existing second-level domains in .nz but not possible future changes, such as direct registration under .nz (which is currently being consulted on) or new generic Top Level Domains that may or may not be introduced at some point in the future.”
The application for the creation of .kiwi.nz was received in April 2012. A 25-day  period of public consultation followed, with 14 submissions received. After considering these submissions, the Domain Name Commission recommended to InternetNZ that the domain be created.
Monahan says that as part of introducing a new .nz second level domain, a threshold of  registrations must be received before the domain is made active.
“We encourage those interested in securing a .kiwi.nz registration to contact a .nz registrar and ask what they need to do to obtain the name of their choice in the .kiwi.nz zone.
“Registrars will advise prospective registrants that if the threshold of 500 for .kiwi.nz is not met, .kiwi.nz will not be made active and they won’t have their name but we think it is a great opportunity for people to get a true ‘kiwi’ tone into their domain names,” she says.

Within the latest NIC.at Domain Name Report are results of a study carried out on Domain Strategy (including details on impacts of new gTLDs)
Click for the Report

The Irish Internet Association (“IIA”) today announces the shortlist for this year’s Dot ie Net Visionary Awards and online voting is now open.  It’s the start of award season and the fully refreshed IIA awards are the first off.  With huge thanks to our headline sponsor in IE Domain Registry Limited (“IEDR”), new categories, a stunning venue at the National Gallery of Ireland and a record number of entries, up 30% on last year, these awards are the ones to watch.

The IIA have been setting the agenda all year – eCommerce strategy, BRIC export market opportunities, cloud standards, development for accessibility and much more.  We’ve reflected these issues in the new categories; Best International “we’ll conquer the world” Irish Technology Business, The Bravest and Best “brick to click” Business, Most “joyous to look and splendid to use” Web Design, Most Indispensible Cloud Service for SMEs.  These awards are more than just trophies, they are coveted titles.

The Estonian Internet Foundation announces the public procurement for an audit of the code of the information systems (Domain Registry Software Security Audit) it uses. This public procurement has been entered in the Registry of Public Procurements under number 132095. The bid submission deadline is 10 September 2012.

The Estonian Internet Foundation is commissioning a Domain Registry Software Security Audit, the results of which must contain answers to the following questions: 1) code security; 2) code quality; 3) quality of information system data administration; 4) suitability of the information system for DNSSEC implementation; and 5) information system sustainability.

You can apply and view the public procurement documentation by no later than 12:00 on 6 September 2012.

Please download the public procurement documentation form and submit your questions through the Registry of Public Procurements.

Prague, 25 July 2012 – CZ.NIC Laboratories, the research department of the maintainer of the .CZ national domain, in cooperation with the Czech representative of Microsoft, have launched the DNSSEC Validator, a new security add-on for Internet Explorer (IE) browsers. With this application, the browser can verify whether the visited websites are secured by DNSSEC technology. This way, users can know immediately that the site is not fraudulent and that there is, for example, no risk of sensitive data theft.

“According to a study of the NSS Labs security company, Internet Explorer versions 8 and above consistently rank first in efficacy in the fight against Internet attacks, particularly thanks to IE security features such as the SmartScreen Filter or the Application Reputation system. DNSSEC Validator is another element that further strengthens the security of Internet Explorer users, protecting them from fraudulent websites which are appearing increasingly often in the Czech Republic,” says Lukáš Křovák, manager of the Windows Client division at Microsoft.

CZ.NIC Laboratories has already published several versions of the DNSSEC Validator plugin for Mozilla Firefox and Google Chrome browsers. Now the add-on has been released for Internet Explorer as well, so far only for 32-bit versions (IE versions 6 through 9). More information on the current version 1.0 is available on the project website - http://www.dnssec-validator.cz/ie/.

ABOUT THE DNSSEC TECHNOLOGY

DNSSEC is the extension of the DNS system, which increases the security of domain names. The principle of DNS is the translation of human-friendly Internet addresses, such as www.nic.cz or www.dobradomena.cz, into numerical addresses understood by computers, which can in turn provide services such as displaying web pages, sending e-mails, Internet telephony etc. DNSSEC increases security while using DNS by preventing forged, altered or incomplete domain name data. CZ.NIC association, as the administrator of the .CZ and ENUM domain registries, implemented this security technology for the holders of these domains and for the users of the Czech Internet in September 2008. More information can be found at www.nic.cz/dnssec/.

A majority of new registrants are brand names who seek not only to  protect their intellectual property, but also to ensure that searches uniquely lead to their sites, since search engines treat both Cyrillic and Latin results in Serbian language equally.

Internet addresses in Cyrillic are particularly well-received by the Serbian expatriates, who see them as another vehicle to preserving their cultural and national identity. 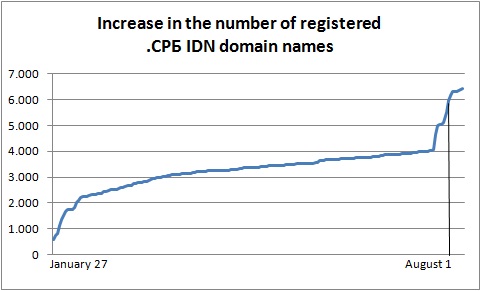 Registration of .срб domain names is carried out through registrars whose list can be found here

In its fight against malware, SWITCH is demanding that the holders and operators of infected websites remove the malicious code within 24 hours. Thanks to this measure, a total of 1052 Swiss websites have already had the dangerous drive-by code removed from them in 2012.

According to the latest quarterly report published by security firm, Panda Security, 32 percent of computers worldwide were infected with malware in 2012, somewhat fewer than the year before (38 percent).

Switzerland is No. 1 worldwide with the lowest infection rate.